The delegation was made up of representatives of the National Cyber Security Centre, National Communications Authority, National Information Technology Agency and members of the Ghanaian business community.

This year’s conference on cybersecurity, under the banner CyberTech 2020, attracted high-level government officials, technocrats, experts and business leaders from across the world to deliberate on common challenges facing their countries/organisations and devise strategic policies to combat cybercrime worldwide.

To boost co-operation to strengthen cybersecurity between the two countries, the MoU recognises that the proper functioning and security of the digital environment (including the internet) are essential to the performance of economies and societies, and stimulate growth, innovation, well-being and inclusiveness.

The MoU also highlights the role of public and private organisations in managing cybersecurity risks, as well as the pivotal role of governments in developing and deploying policy measures, tools, regulatory and operational responses to mitigate cybersecurity risk.

It provides opportunities for capacity-building which will complement the work that the Government of Ghana, through the Ministry of Communications, has already started.

Ghana will also be able to explore areas of cooperation and seek further ways of sharing and exchanging information, especially on cybersecurity incidents, as an “early warning system” which threatens the digital ecosystem.

Mrs. Owusu-Ekuful noted that technology and processes alone are not enough to protect the citizens of Ghana and Israel and stressed the need to develop the necessary human resource base to support the processes.

Ghana therefore would seek support from Israeli universities and institutions, the Minister said, to train Ghanaian officials by means of academic exchanges and professional development courses. She added: “This MoU is a perfect mechanism to achieve this important goal for the Government of Ghana.”

It is envisaged that the MoU will complement national efforts, especially in the area of cybersecurity research and development, towards achieving self-reliance and building exports of cybersecurity products and services in the sub-region, Mrs Owusu-Ekuful said.

Under cooperation in the fields of telecommunications, post and information technologies, both countries agreed on the basis of equity, reciprocity and mutual benefit to develop telecommunications and postal services between the two countries, in accordance with the provisions in the MoU.

The MoU is also expected to facilitate further discussions between Ghana and the State of Israel on the development of telecommunications and information technologies. 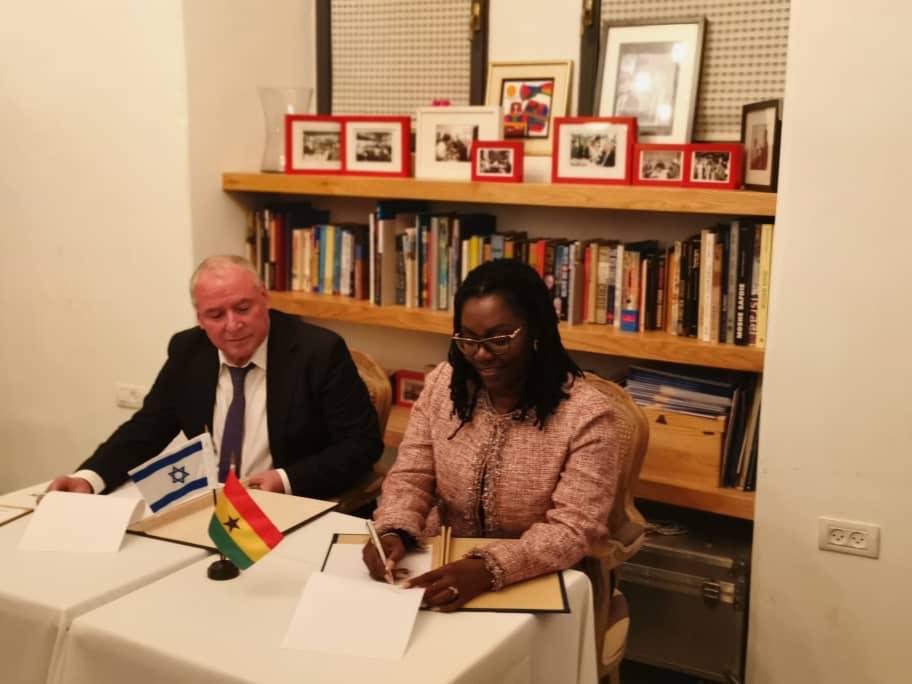 The Ministry of Communications has taken certain steps in the past three years to scale up cybersecurity across all sectors of the Ghanaian economy.

The Government has established both a computer emergency response team (CERT) and a security operations centre (SOC) for both the telecommunications and financial sectors: two critical areas of the digital ecosystem.

Other critical factors such as the Police Service, the military and national security services, which depend on information-sharing to defend Ghana against cybersecurity threats and cybercrime, will soon be added to the CERT and SOC projects.

To create and enhance awareness, Ghana has launched a National Cyber Security Awareness Programme – “A Safer Digital Ghana” – and the initiative has led to citizens’ increased awareness of the four focus areas of the campaign: children, public, businesses and government.

In 2019 alone, more than 39,000 students from second-cycle institutions across all 16 regions of Ghana were sensitised under this initiative. To facilitate incident reporting by the public, Ghana launched a National Cybercrime/Cybersecurity Incident Reporting Point of Contact (PoC) on 1 October 2019.

The MoU with the State of Israel will further scale up Ghana’s readiness in relation to cybersecurity, especially regarding the protection of critical national information infrastructure.